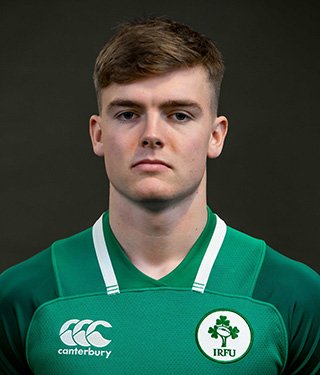 The Bansha native was a key player for Rockwell College and guided the school to the semi-finals of last year’s Munster Schools Senior Cup, while studying for his Leaving Certificate, in which he achieved a maximum 625 points.

As a result he was awarded the prestigious Naughton Foundation scholarship award and is now studying chemical engineering at the University of Limerick.

He made his Munster A debut in the Celtic Cup against Dragons A in September and having made a big impression from out-half with Shannon in the AIL this season, Flannery earned a call up to the Ireland U.20’s squad for the 2019 Six Nations.

Having switched to full-back, he has been one of the key players of the championship and has made more metres and beat more defenders than any other player across the opening round of the 2019 U20 Six Nations. His kicking game and intelligent decision-making in particular have really come to the fore in the championship.

Ireland are already the Six Nations Champions following their win over France last week and they will be hoping to complete the Grand Slam when they face Wales in their final game. Jake will again, we expect, wear the No.15 jersey when he lines out for Ireland in Wales on Friday night next and we hope that he will return to Tipperary with another honour under his belt as a member of the Irish Grand Slam U.20 Team.

As one of the standout performers for Ireland, it is wonderful to see him being chosen as the Grand Marshal for the Tipperary Town Parade and it is an honour that he really appreciates. For his family, his community in Bansha and for all his rugby associates this is a really special day and Tipperary Town is delighted to have such an inspirational young man as the Grand Marshal for 2019.

He will follow in the footsteps of previous Grand Marshal and former Shannon, Munster and Ireland rugby player Alan Quinlan. There is no doubt but if Jake’s rise in the game continues that he may even surpass the achievements of Alan, who retired from rugby in 2011 and is now a TV rugby commentator.

The Tipperary Town Parade, in association with Tipperary Credit Union, will start at 2pm on St. Patrick’s Day from the Canon Hayes Recreation Centre. There is a new route this year due to road works on the N24 Davitt Street.

The route from the Canon Hayes Centre is turning right from Avondale Crescent up Bank Place, along Main Street (where the reviewing stand will be situated) and finishing at the top of O’Brien Street.

The organisers hope that families and individuals will turn out in large numbers to celebrate St. Patrick’s Day and they extend best wishes to everyone for a safe and enjoyable parade.