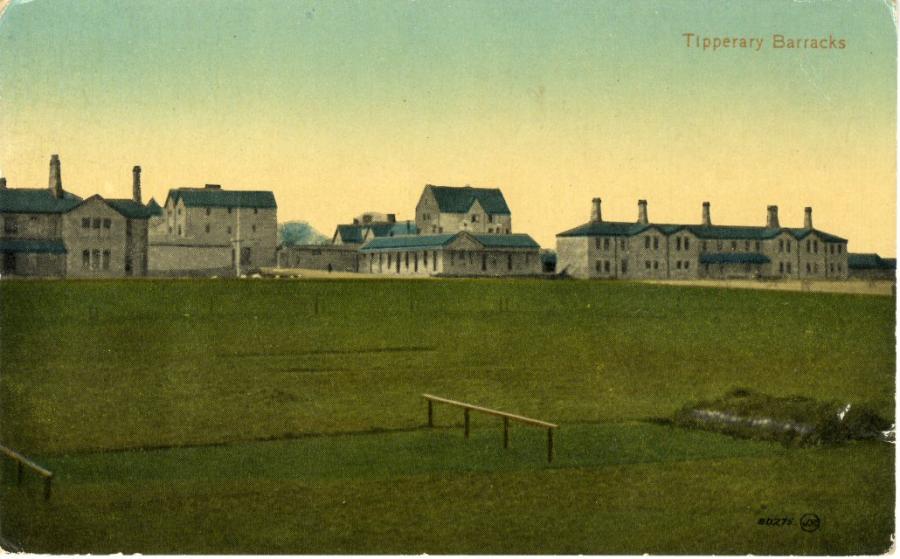 At the height of their powers, during World War I, military installations in Tipperary Town were host to 4,000 soldiers, and these played a vital role in both the economic and political affairs of the town for over forty years. The Barracks was established in the late 1870s, but it was not the first home of the British Army in the town; during the mid 1860s, when a Fenian Rising was widely mooted, Tipperary Workhouse was taken over by the military as a temporary base. The barracks accommodation was supplemented by the establishment of timber structures outside the town, near Scallagheen, which were known as the Hutments. During the First World War the presence of the barracks greatly added to Tipperary Town’s prosperity, as a steady stream of soldiers returning from and departing to Europe’s trenches ensured plentiful trade for the town’s industries. As a result, relations between locals and soldiers in the town were fairly cordial, and even most nationalists in the town looked upon the barracks with nothing worse than indifference.

The Rise of Nationalism

This situation was to change enormously, however, with the outbreak of the War of Independence in 1919. The barracks then became the base from which the rebels of the locality were hunted down, and a number of I.R.A. members (among them Capt. James Hickey, Lt. William O’Brien and Adjutant Martin Purcell) met their deaths within the barracks’ walls. The British Army withdrew from the barracks in February 1922, and it was quickly re-occupied by Irregular forces. As the Civil War progressed it became apparent to the I.R.A. that they would not be able to hold the fortification in the face of a Free State assault, and so, on 16 July 1922, the billet was burned. Comparably little evidence of the barracks remains today, the hospital, water tower and entrance to the officers’ quarters being the exceptions.

Sean Treacy Park G.A.A. field today covers much of what once was the very extensive Tipperary Barracks. 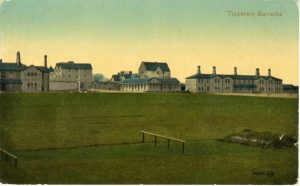