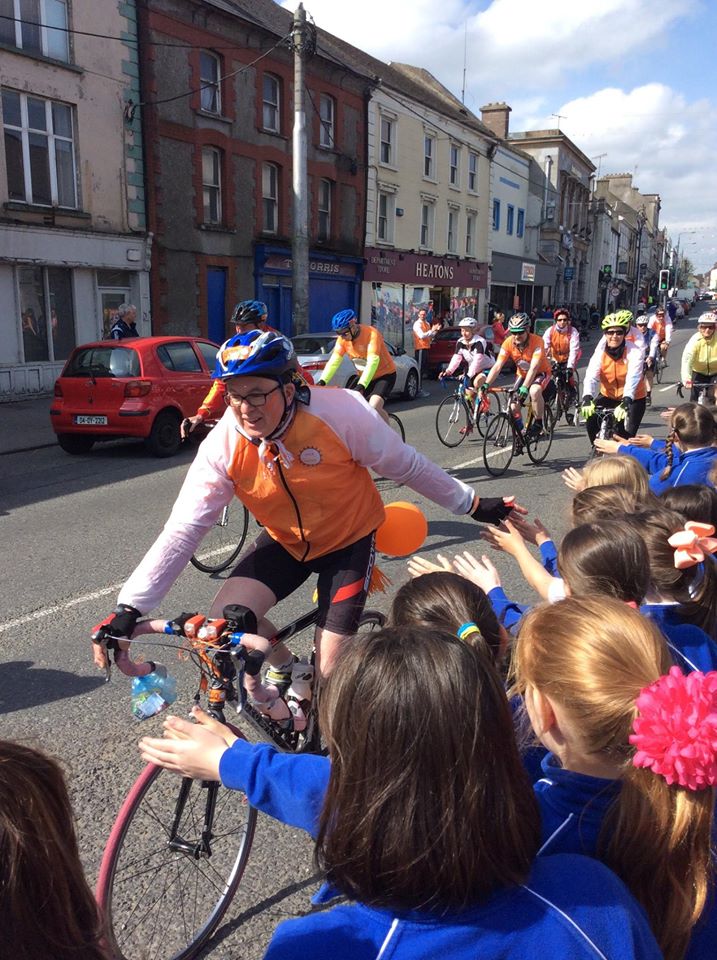 Cheers of joy and happiness swept through the Ursuline Secondary School Thurles on Friday morning as students, teachers and members of the public came together to celebrate life and share the Cycle Against Suicide anthem that “it’s okay not to be okay.”

Nearly 400 cyclists were welcomed to Thurles on Thursday evening on the twelfth day of the nationwide cycle to break the stigma surrounding mental health, with sixty students from the Ursuline secondary school joining the growing cycle brigade.

And the town of Thurles certainly didn’t disappoint as shops decorated their windows with the familiar orange colour of CAS and locals and students lined the streets to cheer on the weary cyclists who had completed the arduous journey from Fermoy.
Over 100 homes in the Thurles area provided homestays for the group with the Ursuline hosting an energetic reception at the school yesterday morning before sending the cyclists off on one of the last legs of their epic 14 day tour of Ireland.
The Ursuline were successful in their bid to be one of several anchor schools in the country last year bringing the welcome “sea of orange” back to the Cathedral town once again.
Radio presenter Colm Hayes said he was blown away by the enthusiasm and energy of the students who had been busy turning the grounds of the Ursuline orange with balloons, flags and posters.

During the reception several guest speakers stepped in front of the microphone to share their personal stories of how they triumphed adversity in their lives, reinforcing the CAS anthem “it’s okay not to feel okay” and “it’s okay to ask for help.”

The former Tipperary minor hurler was diagnosed with Leber’s Hereditary Optic Neuropathy at 19, a rare genetic disorder that would eventually rob him of his sight.

When he received his diagnosis he says he was the “only one in the room not crying.”

Instead he says he “put up a front”, telling friends and family “it is what it is.”

“I’d tell people I’m grand. I just didn’t want to talk about it with anyone.”

However when he could no longer play the sport he loved or continue his job in the construction industry, he felt the one last aspect of the “old Peter” he could retain was socialising.

“I socialised to the point that I became antisocial. I rationalised that drinking was one of the only things I could do the exact same as old Peter.”

Eventually he decided to ask for help and entered an alcohol treatment centre at 22.

“The day I decided to go and get counselling and go to a treatment centre was the best day of my life.

“I went in there negative. I had a big list of things I couldn’t do but inside there, through counselling, through talking, I got to take a step back from all these problems.”

During his treatment Peter met the Fighting Blindness Charity before developing his own network of visually-impaired friends and colleagues and eventually decided he would return to his love of sport.

In 2013 he took up tandem cycling and last year was named as part of Team Ireland at the 2016 Paralympic Games in Rio.

“In the last six years nothing about my condition has changed bar my headset,” he said.
Email: news@tipperarystar.ie