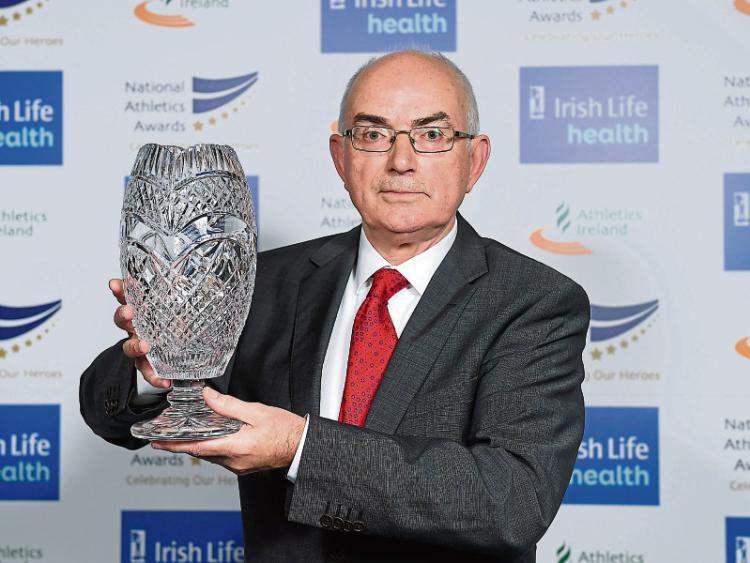 Tipperary Town native Liam Hennessy was presented with the Lifetime Services to Athletics award at the recent national athletics awards in Dublin.

RTE’s sports journalist and broadcaster Greg Allen outlined a history of years of exceptional voluntary service given by Liam to the sport over some 40 years at national and international level. This culminated with Liam’s elevation to President of Athletics Ireland from 2008 to 2012 and more recently as a Council Member of European Athletics from 2011 to 2015. In the latter position he was the second Irish person ever to achieve that distinction.

Liam’s major earlier achievements include being a Director on the organising committee of the World Cross Country in Limerick 1979, followed by Olympic Team Manager in 1980 in Moscow. He served on the Board of Athletics Ireland from 1978 to 2015 continuously; Public Relations Officer in 1984 to 1988, General Secretary from 1990 to 1998, Vice President 1999 to 2001 and International Secretary from 2002 to 2008.

Liam’s expertise on the technical side of the sport and his involvement as an European Technical Official for many years was highlighted at the award ceremony as well as his work over the decades as a statistician in chronicling the statistics of the sport.

There was also much praise for his work in recent years in organising major international events and in particular the hugely successful European Cross Country in 2009 and the European Team Championship in track and field in 2013.

Liam left Tipperary town in 1972 having worked as a Post Office clerk in the town for a few years. He went to school in the Abbey CBS, worked in Limerick for ten years and has been living in Dublin since 1984. His brother John lives in St. Michael’s Avenue, Tipperary town.

Liam’s wife Teresa is a principal of a secondary school in Dublin, his daughter Claire is an author of several books for children and young adults and works part time for Penguin Random House as children’s editor for Ireland and also is the children’s and YA book reviewer for the Irish Times. His son Tim is working in Vancouver, Canada for the past three years since he finished college.

“From a very young age I was always very interested in how the athletics sport worked and read voraciously on its history and the personalities,” said Liam. “I wanted to get involved and it all evolved from the time I took up positions as secretary/public relations officer on the Tipperary County Board in my mid twenties and it went on exponentially from there.”

At this time, Liam also wrote the County Athletic notes for the local club for the Nationalist.

As an athlete Liam competed in middle distance races on the track as well as cross country and road races. He won many county championships and had some small successes at Munster level and had a best result at national level finishing 4th in an Irish senior 5000 metres.

“It’s hard to articulate how I felt when I received the Lifetime Services to Athletics award. I actually Chair the awards committee but this year the Board of Athletics Ireland said to exclude that award from our deliberations. I was delighted to receive the award and it was strangely emotional being called out and quite difficult to give coherent answers to questions by Greg Allen from the stage” said Liam.