Churning out the champions at Tipperary festival 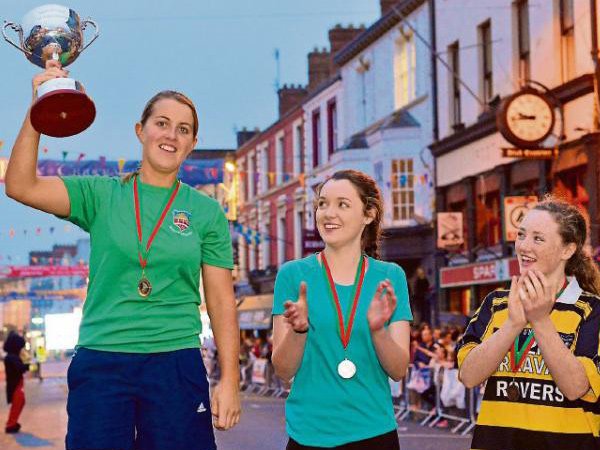 Thrilling! Exhilarating! Nerve-wracking and amazing is the only words to describe the Tipperary Co-op all-Ireland Churn Rolling championship 2016.

This unique sport entertained thousands of spectators in Tipperary town over the Tipperary festival weekend with legendary former GAA commentator Micheál Ó Muircheartaigh leading the commentary during the thrilling finals.

After months of training the churn races kicked off on the Friday evening with exhibitions from some of the younger churn rollers before the Juveniles, the Minors, the Over-40s and the Ladies’ and Men’s teams took to the street in the preliminary heats.

Weather conditions proved to be perfect, making for fast and exciting displays of skill, control and strength.

However it was the finals on Saturday evening that exhibited the finest athletes of this unique sport. The legendary Micheál Ó Muircheartaigh painted a picture of each and every race with that inimitable commentary style that just can’t be equalled and the contestants’ efforts were immense. At one stage two competitors in the Men’s Senior Quarter finals lost control of their churns in their efforts to get to the finish line as fast as they could. When the finals came, the start-line saw some of the sport’s best-known names challenging each other for victory. The current Men’s Senior Champion, Kilfeacle man Brian Roche was lined out with the 2014 champion, Arravale Rovers’ Seamus Kinane and Brian retained his all-Ireland champion title in a thrilling 100m dash.

The ladies’ event also ended with reigning churning rolling champion and 2004 All-Ireland Camogie winner Geraldine Kinane holding on to the winner’s cup for another year.

The championship for the Over-40s also resulted in the current winner retaining the title for an exceptional third year in a row, when Donal Ryan, representing Tipperary Co-op snatched victory.

“Churn rolling is a celebration of rural life and Tipperary’s passion for sport,” explained Kieran McGuire Tipperary Co-op. “Workers at Tipperary Co-op came up with the idea of churn rolling for the 1964 Tipperary Town Festival and it was revived in 2012 for The Gathering celebrations with intentions to attract new visitors and old friends home.”

Stevie O’Donnell, Chairperson of the 2016 Churn Rolling Championship was delighted with the turnout for the event. ”Overall, the event was a huge success and in excess of 4000 people lined the streets over the two nights. In recent years we have seen the sport gain in popularity and over the weekend people gathered from across the country and from overseas to witness an event not to be seen anywhere else.”

The Tipperary Churn Rolling Association would like to acknowledge the huge community effort involved in making it the most successful championships yet. Particular praise should go to all of the community organisations, voluntary groups and corporate sponsor the Tipperary Co-op who worked tirelessly to make Tipperary town the destination for so many people this weekend.