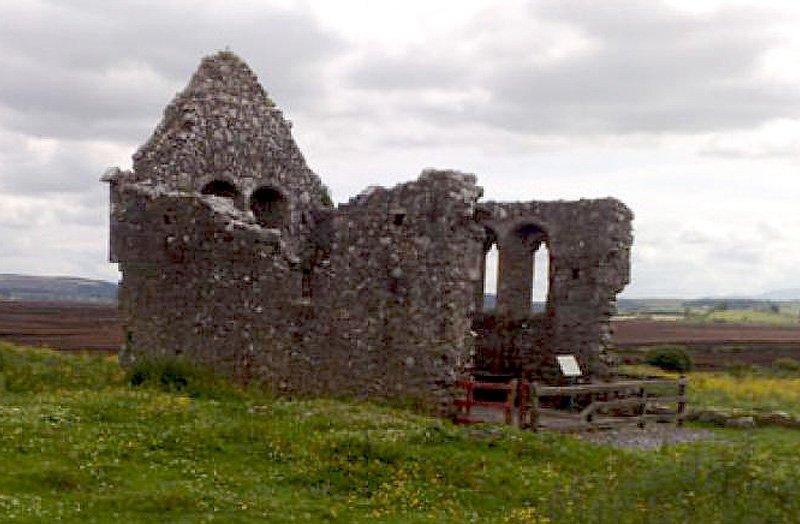 Derrynaflan is a small island of mineral soil in Killeens bog Co. Tipperary. The island is about 4km south-east of the town of Horse and Jockey, which is just off the M8 Dublin to Cork motorway north of Cashel and is reached by a regional road from Horse and Jockey that leads across Killeens bog to the southern part of the island. Access to the site is over a gate and through a field.

The monastery of Derrynaflan was founded by St. Rhuadhan of Lorrha in the sixth century. Derrynaflan was an important monastery in the eighth and ninth centuries and came under the patronage of the King-Bishops of Cashel. After the death in 847 of Feidlimid mac Crimthainn the King-Bishop of Cashel, the monastery went into decline. Nothing of the early monastery remains except the faint outlines of the monastic enclosure. The upstanding church on the site is a later Medieval building which now consists of the east, north and south walls of the chancel with the foundations of the nave visible beneath the sod. Five thirteenth century windows survive in the walls.

The site is best known for the treasure discovered there in 1980, one of the greatest archaeological discoveries of modern times. The treasure hoard consists of a highly decorated ninth century silver chalice, a large eighth century paten and stand, an eighth century liturgical strainer, and an eighth to ninth century bronze basin. The objects in the hoard date to different periods and did not originally constitute a single communion set. The treasure appears to have been buried in the ninth or tenth century to conceal it, probably from Viking raiders. The hoard is on display in the National Museum in Kildare St. Dublin.

The discovery of the hoard lead to years of legal action between the finders and the Irish State that went all the way to the Supreme Court. In the course of which the law of Treasure Trove which had operated in Ireland until that time was found to be incompatible with Irish law. This resulted in the 1994 National Monuments Act that vested in the Irish State the ownership of all archaeological objects found in the territory of the State.

A stone slab found on the site and now in the National Museum is inscribed “or doan main dubscull” a prayer for the soul of Dubscuile. The island has other remains including a ring-barrow with cremation burials and a Medieval cemetery that were investigated in the 1980s but to date nothing on the excavation of these sites has been published.