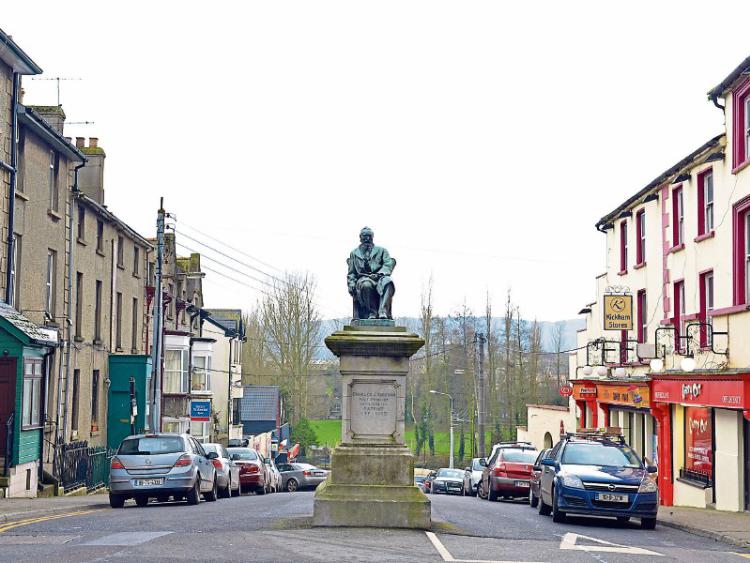 This statue in Kickham Place commemorates the author of one of the country's most famous and best-loved books, "Knocknagow". Charles J. Kickham's popularity was further enhanced among his countymen through his heavy involvement with the revolutionary movement, namely the Fenians.

Born in Mullinahone in 1828, Kickham served the apprenticeship of a rebel from an early age. When he was 15 his sight and hearing were permanently damaged when a can of gunpowder he was attempting to dry exploded. His disabilities did not deter him from involvement in his literary or revolutionary endeavours, however. Following the ill-fated 1848 rising in the Widow Cormack's in Ballingarry, Kickham was forced to live the life of a fugitive for a time. He later became firm friends with John O'Leary, and spent a time working on the Fenian newspaper, "The Irish People". In 1865 he was found guilty of treason and spent four years in Pentonville Prison, having been released early due to his failing health.

The remaining years of his life were spent writing, and, along with "Knocknagow", his best-loved works include "The Irish Peasant Girl" and "Slievenamon", the song most synonymous with Co. Tipperary. Kickham died in 1882, and is buried in his native parish, Mullinahone.

Shortly after his death, plans were made in Tipperary Town to erect a monument to his memory, and the commission was granted to John Hughes, R.H.A. The life-size statue was unveiled on 27 November 1898, and the occasion was marked by a huge nationalist demonstration, which was addressed by Kickham's old comrade, John O'Leary. In the years that followed, the monument was used as the site for all kinds of political gatherings.