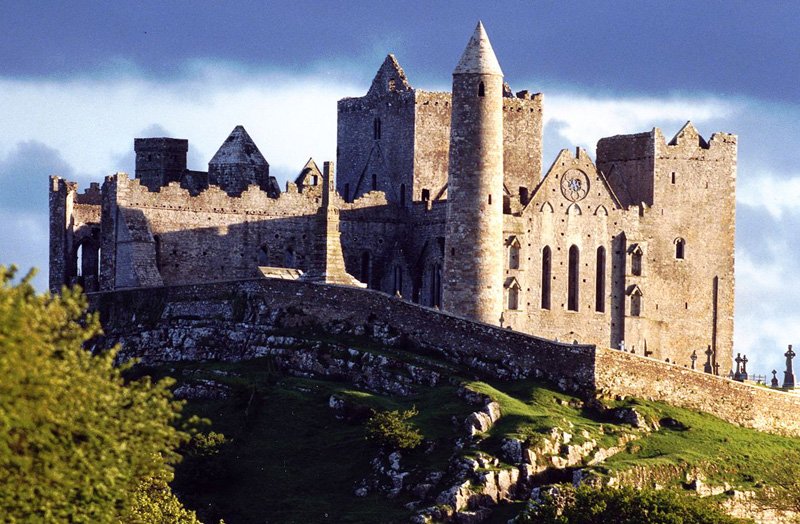 There is more to Cashel than the Rock, however, as the town’s fine heritage trail illustrates. Take the Cashel Palace Hotel, a Queen Anne-style mansion that once housed the local archbishop. Cashel is also home to St John the Baptist Church (1749) and the Georgian St. John’s Cathedral. The former boasts a mosaic of the ascension of Christ into heaven, the latter an organ by Samuel Green.

Cashel’s hidden gem is the Bolton Library (housed in the Cathedral chapter house), which was founded in 1744. This unassuming building hosts the finest collection of antiquarian books outside Dublin, including early editions by Dante, Swift, Calvin, Erasmus and Machiavelli.

The Rock of Cashel is one of Ireland’s iconic sights, a chapel, abbey and round tower perched on a plinth so perfectly poised, it rises from the Golden Vale like a vision. It’s an awesome silhouette, a breath-taking complex that has dropped the jaws of generations of tourists.

The Rock is the former seat of the High Kings of Munster, but the enclosure standing today on this craggy pedestal is a more recent build, containing a round tower, the remains of an abbey and the finest 12th-century Romanesque chapel in Ireland. It really is a peach.

Elsewhere, Cashel’s heritage centre and tourist information office contains a fascinating model of how the town looked in the 1640s, and another stop on the heritage trail, Bothán Scóir, is a reconstruction of a 17th-century peasant dwelling on its original site. Opposite the Bothán, you’ll find the ‘ducking pond’, where punishment was dished out to ladies deemed guilty of ‘unsocial’ behaviour.

West of the Rock is Hore Abbey, the last Cistercian foundation in Ireland. It’s a forlorn old husk, but well worth a mosey, as is the sinister-sounding Path of the Dead, a trail linking the Rock and Camas Road that was once used to take the dead to their burial place.