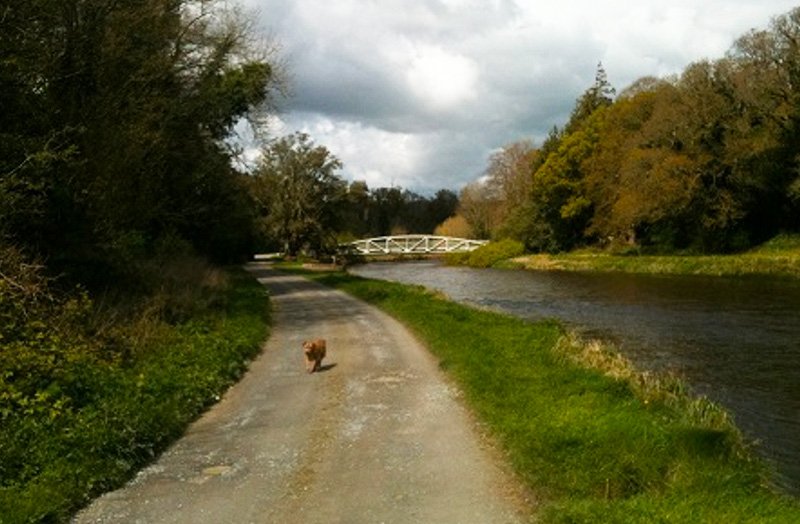 Cahir Park Forest property formed part of the land acquired by the old Department of Lands from the Charteris Estate in the 1930`s. It was originally acquired by them from the Butlers of Ormonde in the 18th century. It is approximately 40 hectares in extent. The river Suir splits the property. The Suir is a major and very popular salmon fishing river and there are paths along the river banks and fishing stands to access it. The geology of the area is a limestone crag.

All stands of trees here are broadleaves. The majority are of Oak and Beech planted around 1790 – 1800 with younger stands of mainly Ash and Sycamore planted in the 1980`s. Some of the Oak stands are “seed stands” which means that acorns (seed) collected from them are used to grow transplants which are replanted in suitable sites throughout the country to replace conifers and extend our Native Woodland.

There is also a stand of ancient Yew trees (Taxus baccata) that is being conserved under the EU LIFE project ‘Restoring Priority Woodland Habitats’. This stand of yew may have survived from ancient times as a relict woodland on a limestone outcrop, and may have been protected from felling by virtue of its location in the Charteris Estate. Non-native tree species are removed and replanted with transplants from seed collected from the existing trees.
The fauna present include swans and ducks on the river as well as squirrels, pheasant and grey squirrel in the forest.

Cahir Park is managed for recreation purposes and contains the Swiss Cottage which is managed by the OPW and is open to the public. Walking trails within the forest include way-marked ways, St Declan’s Way and local heritage walks. There are also fishing opportunities.