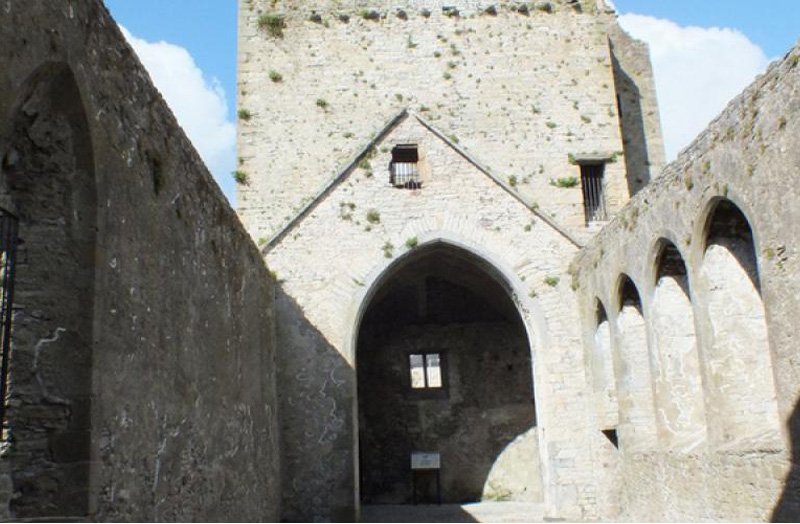 The Priory of St. Mary in Cahir, called Catherdunesque (with various spellings) in medieval documentation and known today as Cahir Abbey was a house of Augustinian Canons.

It was probably founded in the late decade of the twelfth century and was certainly in existence by c.1200 when the prior is listed as a witness to one of the documents contained in the register of the hospital of St. John’s Dublin. In this, a grant to the hospital by Geoffrey de Camville (a Norman Knight), the prior John is described as first prior (Primo – Priore) of “Kaherdunesche”, which suggests that the priory was a relatively recent foundation at this time. It is the same Geoffrey de Camville who is credited with the foundation of the priory in Cahir. Geoffrey was Baron of both Cahir and Fedamore in Co. Limerick, which would explain links between the priory and Fedamore throughout the medieval period. It should be stated that the foundation date for the priory is not necessarily the same as that of the Church building itself, which could be earlier. It was not uncommon for houses of Augustinian Canons, to be granted parish churches as part of their endowment by law proprietors. In this context it is interesting to note that at the Dissolution (1540) the church building was found to be the Parish Church and therefore not taken by the Crown.

The priory does not figure largely in contemporary documentation and seems to have had a relatively tranquil and unconventional existence through to its dissolution in April 1540. In the Ecclesiastical Taxation of 1302-06, the priory is valued at 6 pounds 18s.8d, which placed it as a middle ranking house of the diocese of Lismore. The fifteenth Century saw the prior (never personally named) regularly mandated by the pope to serve on commissions of inquiry into the running of the church within the region. The major event of the sixteenth century was the surrender of the priory in 1540, by the prior “Edmond O’Lonergan”, who received a pension of 3 pounds,6s.8d. out of the possessions of the priory. Archdall (1786) records that “Edward Lonergan”, who surrendered the priory, was made Vicar of the parish church of the Virgin Mary of Cahir on April 26th 1540. An extent of the priory was made in January 1541, which found that the church building had “from time immemorial” served as the local Parish Church and could not be forfeited to the Crown. The remaining buildings of the priory seem to have formed an integrated unit, which passes to the then occupier, Sir Thomas Butler, who was created Baron of Cahir in 1543. Associated with the buildings was an orchard and garden worth 6s.8d. The Priory also held land totalling 100 acres, a water mill, two eel-weirs, and other minor properties. The total value of the priory in 1541 was 14 pounds 5s.2d.

The chancel of the Church survives, with a good row of fifteenth century single-light windows in the north wall, and an interesting very late east window with carved heads. There are also elaborate carved corbels and good interior mouldings in limestone. There is a massive residential tower, apparently seventeenth century in date, immediately west of the chancel, where one might expect to find a tower and a nave. It was most likely built in the years immediately following the Dissolution of 1540, using the stones of the nave and residential buildings of the Priory. A second, smaller residential tower is located in a detached position to the South.