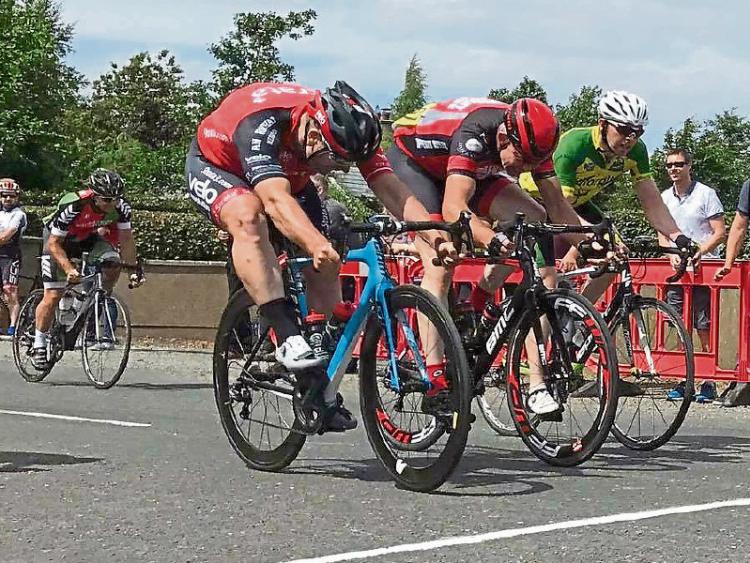 There were ideal racing conditions in Golden for the day’s racing, no rain and some nice sunshine greeted the riders and supporters alike who lined the road side to enjoy the day’s racing.

Starting in Golden Village, heading towards New Inn, then taking the old road to Cashel and returning to Golden, this circuit is 25 km with lots of drags and false flats to be had and it proved to be a great racing course with lots of attack opportunities to get away from the pack.

In the Willie Slattery Memorial Race there were attacks from the gun and a sizable breakaway of 16 riders or so formed on the second lap and established a gap pretty quickly hitting speeds well in excess of 50 kph completing the the lap in under 32 minutes.

Eoin O’Connell (Killarney CC) and Jamie Blanchfield (Panduit Carrick Wheelers) got clear of their breakaway companions and established a gap of 25 seconds. This saw the break away lose cohesion as riders tried to jump across to the two leaders. This lack of cohesion behind saw the gap to the leaders increase on the final lap.

The bunch never stopped chasing behind meaning the guys in the breakaway had to work hard to hold their advantage. Cathal Moynihan and Cathal Purcell tried valiantly to get across to the leaders but never managed to make contact, but did manage to get away from the rest of the breakaway. Inside the final few kilometers the two leaders would not be caught. In a two up sprint to the line it was O’Connellwho beat Blanchfieldfor the win.

Having got clear from the other breakaway riders, Purcell just piped Moynihan to third spot.

In the Eoin Bresnan Memorial Race two riders got clear of the bunch on the second of the 3 lap race and held onto a 30 second advantage to compete for the cup. Stephen Geraghty of Burren Racing beat Shem Cullen of Panduit Carrick Wheelers for first place and the Eoin Bresnan Memorial Cup followed by the bunch coming home to taking the remaining places. Tipperary Wheeler James O’Connor took 8th place which sees him promoted into the A2 ranks.

The Eoin Bresnan Memorial Cup was held in remembrance of the late club man and dear friend to us all, Eoin Bresnan, who sadly passed away last September. Eoin was a true gentleman and clubman, he loved everything about cycling and triathlon. His daughter Debbie presented the Cup to the winner on the day Stephen Gerathy of Burren Racing Team.

In the A4 race also completed 3 laps, Armines Meskauskas of South Tipp Cycling Club showing his strength getting away from the A4 bunch to take a fine win.