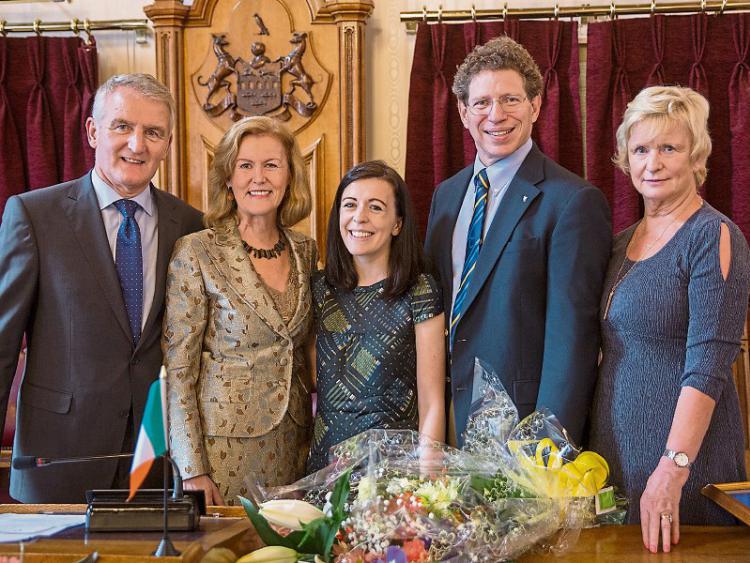 Ireland’s first female ambassador to the United States told a civic reception hosted in her honour in Clonmel that her early years spent on the Slievenamon Road in Clonmel, and her sense of connection to the “beautiful county” of Tipperary, had helped shape her as a person and a diplomat.

Clonmel-born Anne Anderson was paid glowing tributes in recognition of her outstanding career at Friday night’s reception at the Town Hall, where she was joined by her partner Frank Lowe, her daughter Claire, sisters Mary and Helen and her brother Robert.

The gathering also included her cousins, members of the Walsh and Griffin families; and former neighbours from Slievenamon Road, the Carews and Suttons.
Daughter of the late Margaret (Madge) and Tom Anderson, she was born in Clonmel in 1952. She received her early education at the Sisters of Charity School in Clonmel and when she was eight years old the family relocated, first to Kilkenny and then Dublin when her father – who had served as a psychiatric nurse at St. Luke’s Hospital in Clonmel – was appointed as deputy head of the Psychiatric Hospital in Portrane. 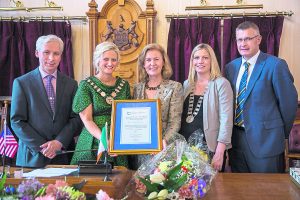 Above: At the civic reception for Anne Anderson, the Clonmel-born Irish ambassador to the United States were, from left, Joe McGrath, CEO of Tipperary County Council; Cllr. Siobhan Ambrose, County Council Cathaoirleach; Anne Anderson; Cllr. Louise McLoughlin, County Council vice-chairperson and Ger Walsh, County Council senior executive officer.
Anne Anderson graduated with an arts degree in history and politics from UCD. Having completed a Diploma in Legal Studies at King’s Inns she entered the Department of Foreign Affairs in 1972.

Following a range of assignments at home and abroad she took up her first posting as ambassador in 1995, when she served as ambassador to the United Nations in Geneva.

This was followed by spells as ambassador to the European Union in Brussels, France and the United Nations in New York. Significantly, she was the first female ambassador appointed to each of those four postings.

She was appointed Ireland’s 17th ambassador to the United States in almost 90 years and is the first female to hold that position, a role that she took up in August 2013. After more than 45 years in the diplomatic service, she is due to retire this summer.

At Clonmel’s Town Hall on Friday night, Anne Anderson said “no honour could be more meaningful” than a civic reception in your home town. She said she was moved and touched by the generosity of spirit and the humour in the tributes paid to her.

She was delighted to be joined by her family and a loyal band of friends who included Marie Cross (neé Keating), who was also ” a loyal daughter of Clonmel”, and who had served as Irish Ambassador to the EU’s Political and Security Committee.

She said that even when the family had left Clonmel her father, who was originally from Roesboro, near Tipperary town, remained a Tipperaryman in “his blood and bones”. When they moved to Dublin he bought The Nationalist in Eason’s in O’Connell Street every week and read each page “microscopically”.

Ambassador Anderson said that this sense of place was very much part of the Irish psyche and she had lost count of the number of times Irish-Americans had asked her where she was from. When they moved to the United States, and to the anonymity of vast American cities, Irish emigrants wanted to keep that connection to home.

Her work as ambassador to the United States over the last four years had been focused on helping to shape and advance the economic and social relationship between the countries.

Investment, trade and tourism between Ireland and the United States continued to go from strength to strength. 70% of Ireland’s foreign direct investment was from the United States and Irish exports to the USA had also risen in recent years.

The ambassador praised Tipperary for being “on its toes” when it came to scoping out opportunities. She praised the recent launch of its promotional and marketing strategy ‘Tipperary – The Place, The Time’, and she also hosted a delegation from the county that visited Washington last year.

Brand reinforcement at county level was extremely important and in the tourism sector the county had a huge amount of potential yet to be realised, as Tipperary was “the undiscovered heartland of Ireland”.

As she prepared for her retirement in July, Anne Anderson said it was her “extremely good fortune” to have had a fascinating career, and to have served Ireland abroad in interesting places and during interesting times.

County Council Cathaoirleach Siobhan Ambrose said that when the ambassador retired she would leave with an impeccable record of service to her country, and would continue to be a role model and trailblazer for young women, particularly those beginning careers in the civil service.

“Internationally, where she is highly regarded, she will continue to be viewed as a hugely efficient, effective and a highly competent contributor to Irish foreign policy”, she said.

Cllr. Ambrose also referenced her many other achievements, which included honorary doctorates from the National University of Ireland and Fordham University.

Joe McGrath, CEO of Tipperary County Council, joined in the tributes, saying that Ambassador Anderson had not alone “shattered glass ceilings but has also broken new ground for those who have succeeded her”. 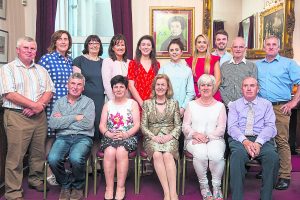