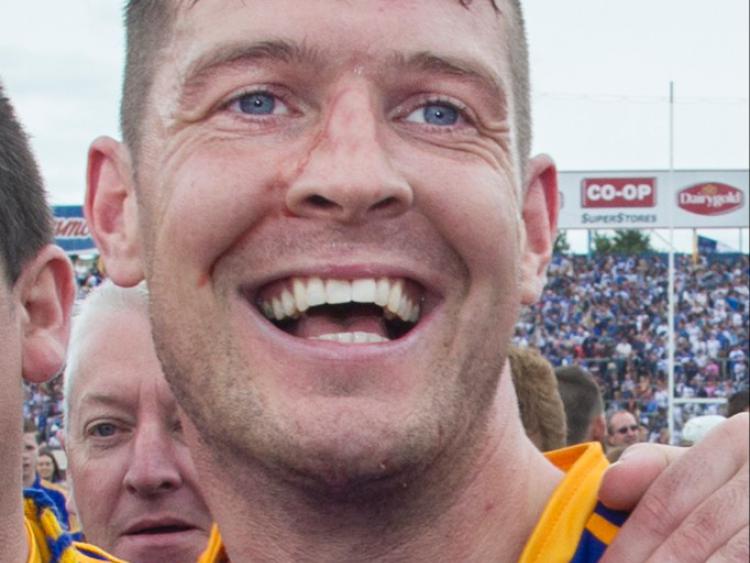 Tipperary 6-26 Dublin 1-19
It wasn’t a flawless performance but as a statement of intent it was impressive.
Green shoots of recovery from their mid-season slump were very evident in Tipperary’s display when they hammered Dublin in the second round of the All-Ireland Senior Hurling Championship qualifiers at Semple Stadium on Saturday evening.
The win was achieved with a flurry of goals, four of which were scored in the opening half as Tipp led at the midway stage by 4-11 to 1-10. And when Michael Breen raced through the Dublin defence to score the fifth 19 seconds after the re-start the game was effectively over as a contest.
All that remained to be decided from that stage was the margin of victory, and Tipp boosted their tally with a sixth goal from top scorer Seamus Callanan at the end of normal time.
Callanan scored 3-11, including 7 points from frees, and Dublin full back Eoghan O’Donnell found him unplayable.
John McGrath, recalled to the starting fifteen, helped himself to 2-2 from play and scored arguably the goal of the game after 21 minutes. Dublin wing back Shane Barrett spilled possession in a tussle with Seamus Callanan and when Callanan presented the chance for McGrath the Loughmore player cheekily lobbed Dublin goalie Conor Dooley to put his side ahead by 3-5 to 1-5.
John Bubbles O’Dwyer, who lined up alongside Callanan and McGrath in a full-forward line that was on fire, was back to his creative best and scored four points, including a fine effort over his shoulder that helped settle his team in the fourth minute.
Right from the start Tipp looked more like their old selves, putting unconvincing displays against Galway, Cork and Westmeath firmly behind them on a humid day in Thurles, and in a game played on a surface that resembled a snooker table in front of an attendance that eventually swelled to 33,181.
There was much more energy about the home side and they were ahead by 0-4 to 0-2 when Seamus Callanan drove home the opening goal in the 8th minute.
However it wasn’t all plain sailing in the opening stages and with the Dublin forwards’ pace causing the defence some difficulties the Dubs were back on level terms after a quarter of an hour when Cian O’Sullivan raced away from James Barry and drove a shot to the net past goalie Darren Gleeson, a late replacement for Darragh Mooney who was ruled out with a back spasm.
Tipp, though, regained control three minutes later when John McGrath stroked a loose ball to the net, and they were six points ahead when McGrath pounced for his second goal.
The signs were ominous for Dublin when Callanan slotted home his second goal after 31 minutes and at half time Tipp were ahead by 10 points and very much in the comfort zone.
It was mostly one-way traffic in the second half as Tipp cruised into the quarter-finals, which will be played the weekend after next.
Jason Forde scored four points from play, including one great effort struck from way out the field in the 52 minute and another equally eyecatching effort three minutes later.
Bonner Maher didn’t make an impression on the scoresheet but typically put in a great shift over the 70 minutes. Michael Breen and Brendan Maher were dominant in midfield while Padraic Maher and Donagh Maher were vigilant in defence. Apart from being skinned by Ryan O’Dwyer on one occasion in the opening half, Tomás Hamill also had a good game.
Tipp’s margin of victory could have been even greater had it not been for a series of fine saves that Dublin goalie Conor Dooley made from Seamus Callanan in the first half and from Dan McCormack and John O’Dwyer in the second period.
Tipperary – Darren Gleeson, Donagh Maher, Tomás Hamill, James Barry, Joe O’Dwyer, Ronan Maher, Padraic Maher (captain 0-1), Brendan Maher (0-1), Michael Breen (1-0), Jason Forde (0-4), Patrick Maher, Dan McCormack (0-1), John O’Dwyer (0-4), Seamus Callanan (3-11, 0-7 frees) and John McGrath (2-2).
Substitutes – Seamus Kennedy for Ronan Maher (45 minutes), Noel McGrath for Brendan Maher (49 minutes), Steven O’Brien (0-2) for Dan McCormack (49 minutes), Michael Cahill for Donagh Maher (55 minutes) and Tom Fox for Padraic Maher (66 minutes).
Dublin – Conor Dooley, Cian O’Callaghan, Eoghan O’Donnell, Fionn O’Riain Broin, Sean Moran, Chris Crummey (0-1), Shane Barrett, Ben Quinn, Niall McMorrow, Donal Burke, Liam Rushe (captain 0-2), Cian O’Sullivan (1-1), Eamon Dillon, Ryan O’Dwyer (0-2) and David Treacy (0-11, 8 frees).
Substitutes – James Madden for Shane Barrett (24 minutes), Fergal Whitley for Niall McMorrow (half time), David O’Callaghan (0-1) for Donal Burke (half time), Tomás Connolly for Sean Moran (50 minutes) and Rian McBride (0-1) for David Treacy (58 minutes).
Referee – Alan Kelly (Galway).