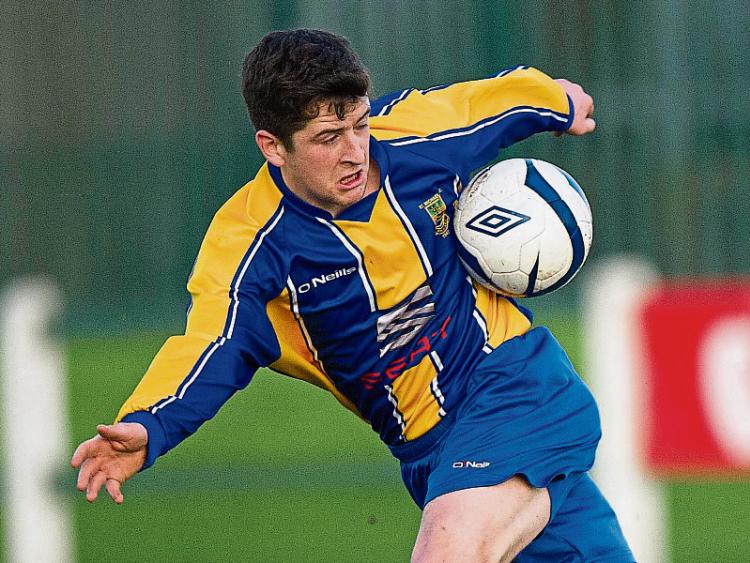 Another year, another John Delaney Cup final appearance for St Michael’s as the Premier League champions cruised to an easy 3-0 win against perennial rivals Clonmel Town at the Complex.

They even managed to win this tie when down to ten men for the last half hour of the game after they lost Irish junior international Chris Higgins to injury such was the ease with which they played at.

Right from the start the visitors were peppering the Clonmel goal and were ahead after only four minutes when Ollie O’Driscoll made space on the left and crossed for Youth player Rodrigo Goncalves to score with an adept flick past Eoin Power in the Town goal.

This did shake the home side up a little and they were unlucky not to be on level terms when Saints new keeper Adrian Walsh did well to keep out a Manus McFadden free kick in the 11th minute. The hosts then had a strong claim for a penalty kick waved away on the half hour after Jamie Aherne saw an effort cleared off the line, but both Pa Quinn and Paul Breen had the last two efforts on goal in the half missed as the Saints went to the break a goal ahead.

Both sides emptied their benches at half-time as they prepared for the season ahead and early in the second period Saints made it 2-0 after Power could only parry a Shane Ryan effort out to the edge of the area, where it was blasted home by Alan O’Dwyer from less than 12 yards out.

Ryan himself almost extended the lead on the hour mark before Higgins injury reduced the visitors to ten men because they had already used the requisite number of substitutes allowed.

This gave the home side a bit more impetus in attack and they pinned Saints back for long period of the last half hour. Alas they had nothing to show for their efforts outside of a few good chances, which were dealt with by Walsh.

The champions finally ended the game as a contest with two minutes to go when Shane Neville sprung the offside trap and beat Eoin Power from close in. This ensures another cup final early in the season, and Michael’s will have the luxury of waiting to see their opponents when the Thurles derby goes ahead on Wednesday night at 7 pm between Thurles Town v Peake Villa.