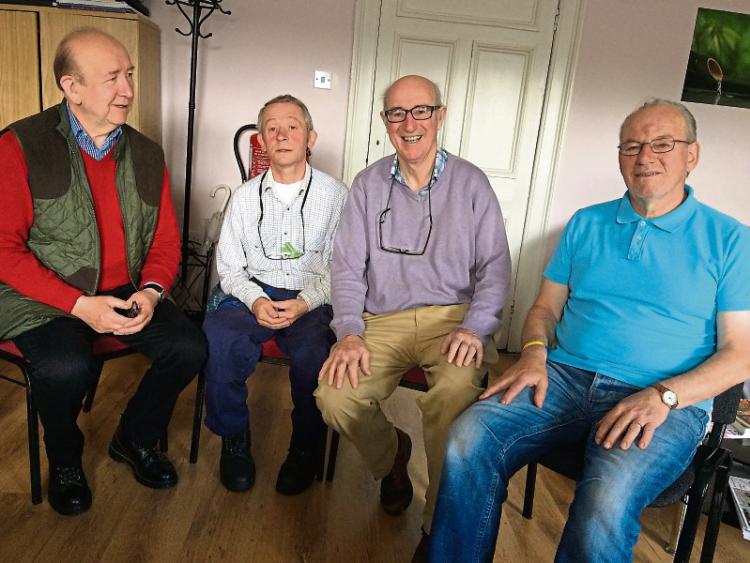 A group of men meet twice a month in Tipperary Town for a cup of tea and a chat discussing the weather, hurling or any other topical issue.

It is a normal conversation among a group of men that have one thing in common – cancer.That common denominator is rarely discussed but on the occasions that one of them wants to speak about it,it can take place in a non intrusive, supportive and friendly environment.

The meeting, which is attended by men and male members of their families who are going through the journey of cancer, takes place in the temporary home of the Circle of Friends group at the Station House in Tipperary Town every second Wednesday morning.
The beautiful building, full of character and light, lends itself to a very special meeting place making a person feel comfortable in a relaxing atmosphere surrounded by friends.

Two of the group members Pat Jones , one of the founders of the Circle of Friends following the diagnosis of cancer for his daughter Jennifer, and Tom O’ Donoghue believe the mens group has a lot of offer men faced with a diagnosis of cancer or members of their family .

They would like to see more men avail of the opportunity to become part of the group and in time to use the services on offer at the Circle of Friends centre.

The Circle of Friends are due to move home next year with building already started on a new modern centre at Knockanrawley beside the gaelscoil in the town.

It is the hope of all those involved that the unique atmosphere of the Station House will transfer to the new centre.

The need for a purpose built modern centre became obvious as the demands on Circle of Friends for its services grew and the amount of people relying on the centre in an ever expanding catchment area continued to increase once it established in December 2013.

Tom O’Donoghue is an advocate of the mens support group working out of the centre.

A retired secondary school teacher, Tom was diagnosed in 2007 and when Circle of Friends was formed he joined the board of directors.

“I was waiting for Circle of Friends to happen, Jennifer and Pat came along and I knew needed such a support group in my life” said Tom.

Tom said that more and more people are surviving cancer and living with cancer and it was important that such support groups were accessible and welcoming.

“Your life is informed by your disease,its like a dictator and it tells you what to do ,it prevents you from doing a lot of things you used to do.Every morning you wake up you have it, you feel you have it and you know you have it and it puts limitations on your day.To cope with that 24/7 you need support” said Tom.

That is why Tom and Pat are anxious that more men should avail of the centre and in particular become part of the Friday morning mens support group who meet every week.

“It is very informal and totally confidential.Everything that is discussed stays here” said Tom.

“We normally meet for two hours, sometimes cancer is not even mentioned.We could talk about hurling,what is going on in the town, talk about whatever comes up really and the time flies” said Tom.

Pat Jones, an inspirational figure in the group and a driving force for the new centre, said that the group was all about providing support to men allowing them to reach out and stay in touch

It was said Pat, all about listening

“You can share whatever is bothering you , it is easy to share it when you know it will stay in the room.There is massive support here for the person” said Pat..The group was facilitated by a trained councillor and one on one sessions was available if somebody wanted it.

Tom said the mens group was not a meeting of great sadness as everyday topics were dicussed and cancer would only arise if one of the men attending felt like sharing something.

“It is all about the support, there is a simple wisdom that applies.It is a happy place people come in here stressed and leave destressed.People know that they are not on their own which is very important.” said Tom.

Tom said the doors were always open to people who are affected by cancer in the family to call to the centre.

“People here have already been on that journey and are going through it , they have the experience and can be of enormous help to people just starting out on that difficult road” he said.

Tom said there are very few mens cancer support groups in the country and Circle of Friends was determined to provide such a valuable outlet.

“We are one of the very few mens support groups inthe country.We know how important it is to have such a group and we would like to see men who are dealing with cancer in their lives to become part of the group