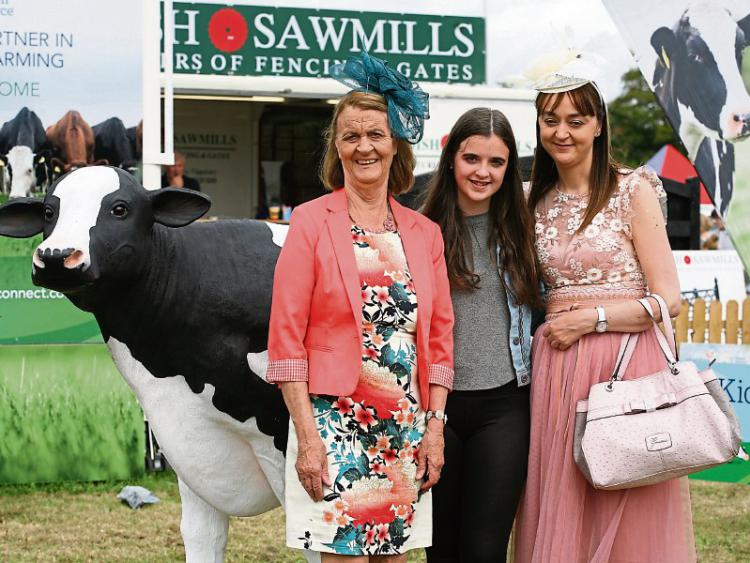 He was among more than 20,000 visitors who enjoyed the country’s oldest agricultural show that attracted agricultural livestock and equine show class entries from as far as Kerry, Leitrim and Wicklow.

The Show was blessed with warm, fine weather and Iverk Show PRO Norman Storey reported that the organising committee was very pleased with the turnout. An Taoiseach Leo Varadkar with Gerri Hickey and Breda Power from Carrickbeg, Carrick-on-Suir during the Iverk Show held on Saturday 26th August.

The Taoiseach was given a tour of the showgrounds and said he was delighted to witness rural and community life at its best. He congratulated the Show’s committee on their efforts. It showed what can be achieved when everyone works together as a community.

Mr Varadker expressed the hope that when the Iverk Show celebrates its 200th birthday in 2026, the economy and the country would be celebrating great achievements also.

He said he was working hard to make sure the country gets the best outcome possible from the Brexit talks. Bord Bia and other government agencies will receive support to expand the country’s agriculture exports into new and existing global markets, he pledged.

The Show was an eclectic mix of traditional agriculture, equine and home industries competitions, trade stands and family entertainment ranging from live music, bouncy castles and other amusements for kids to a fashion show, tug-of-war contest, dog show and displays of vintage cars, engines and machinery. Mr Storey said the emergency services demonstrations conducted by Defence Forces, Garda, Fire Service and Ambulance Service personnel were a big hit among visitors. Laura, Conor, Harry and Patrick Tobin from Ballyneale with Private James Dooley of the 3rd Infantry Battalion in Kilkenny with the Infantry’s Mascot, Irish Wolfhound ‘Fionn’.

Close to €80,000 was awarded to prize winners in the Show’s competitions.

The All-Ireland Broodmare & Foal championship was won by Kieran O’Gorman from Clonakilty, Co. Cork while the Aldi/ABP All-Ireland Irish Angus Bull Calf Championship’s two finals were won by Pat Murray from Roscrea and John Appleby from Co. Cork. The Iverk Champion of Show in the Cattle Classes was won by John Jones from Gorey with M. Ryan from Thurles the Reserve Champion.

Pony and horse jumping competitions took place throughout the day. The Grand Prix was won for the second year in a row by Francis Connors riding Capitol Cruis, owned by Ian Smyth.

Hundreds of cakes, breads, tarts and buns entered in Show competitions were on public display throughout the day. The famous Cherry Cake class was won by Martina Cullinane from Ballinamult, Waterford.

On the social side, the Most Appropriately Dressed Lady contest was won by Anne Maria Shee from Carrick-on-Suir.