Future plans for Tipperary Sports Festival are being considered 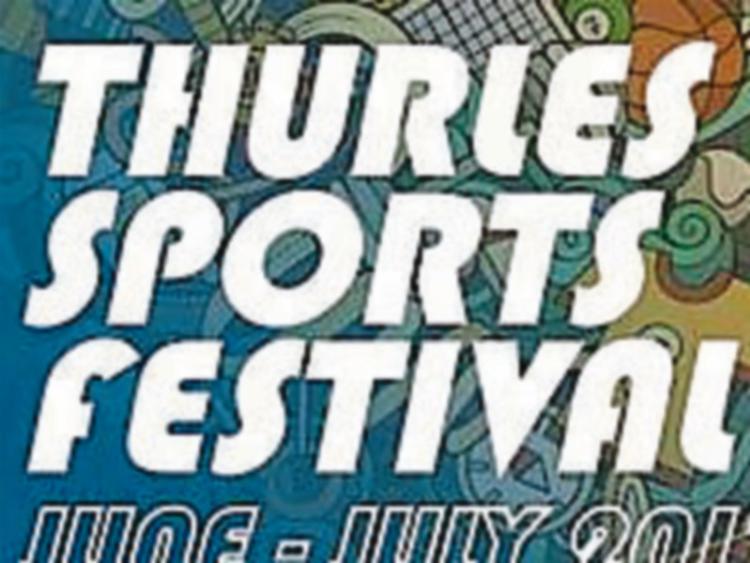 COMMITTEE HAS CHANGED ITS FOCUS
While some Thurles Sports Fest activities remain to be completed, (visit www.thurlessportsfest.com for details), the main events of 2017 have now finished.
Gaelic Games, including the Thurles Sarsfields’ Festival of Gaelic Sport and the Thurles Gaels Street League and International Hurling Tournament formed the greater part of this year’s events.
These events were all well organised and run very efficiently and all who participated enjoyed them immensely. As part of these events Thurles was happy to welcome hurling teams from Europe, London, Armagh, Louth, and Kildare as well as from the more recognisable hurling strongholds of Cork, Clare, Galway, Limerick and Tipperary itself.Many in the Thurles and surrounding communities gave generously of their time to these events including the members of the organising Committee, members of the Thurles Sarsfields and Thurles Gaels clubs, the Tipperary Civil Defence, local scouts, Moycarkey-Borris Pipe Band, Thurles Silver Band, the High Nellies from Durrow, Thurles Crokes Athletic Club and many more.
Though this year’s events were organised very efficiently and were very successful, however, the Committee of Thurles SportsFest is, in the next few months, going to be faced with considering the future of the festival.
Since the inception of the Sarsfield’s Festival of Gaelic Sport in 2010 and the SportsFest in 2015, the aim has always been to promote sports tourism in Mid-Tipperary. The organising Committees have been actively supported in this by Tipperary Co. Council, LIT, Thurles Chamber of Commerce and at different times, Fáilte Ireland, Tipp FM, Croke Park and the Tipperary County GAA Board. The intention has always been to capitalise on the wide range of sporting facilities available in Thurles and to use this critical mass of facilities to attract visitors to the town and the area.
According to Jim Ryan, Chairman of the Committee “The initial strategy being pursued bythe Committee was to stimulate interesting sporting events which would attract substantial crowds over a one-week period. It has, however, become clear to the Committee that attracting visitors as spectators at new sporting events is going to prove difficult at best. The Committee has changed its focus, therefore, and is now concentrating on participants rather than spectators.” As stated above, this year’s SportsFest attracted many participants from abroad and from parts of Ireland which are a good distance from Thurles.
Many of these visitors stayed in Thurles for one or more nights and availed of the services in the town during their stay. This is the model which the Committee wishes to pursue in the future. In that context, it is currently working on the establishment of a significant participant event which will be based in Thurles for the foreseeable future.
This change of focus of the SportsFest Committee is also being driven by financial considerations. The SportsFest has been made possible primarily through the generous funding provided by Tipperary County Council and LIT.
It is unlikely that this level of funding will be available in the future, so the Committee is now actively seeking sponsors for future events and it is hopeful that such sponsorship can be obtained.
This approach, which the Committee believes is the only viable option for the future, will, however, according to Jim Ryan, “require that the scope of activity be extended outside that of GAA-related sports to a greater extent than heretofore and, indeed, outside the sphere of sporting activity.”
In the past other sporting organisations in the town have attracted visitors to participate in specific events. Thurles Rugby Club, for example, brought French teams to Thurles for coaching in the 1980s. With the magnificent strength and conditioning facility now available in LIT, the Committee is convinced that opportunities for other sports to contribute to the development of Thurles as a sporting location can be developed.
Over the next few months, therefore, the Committee will be consulting with all the sporting and service providers of the town and surrounding area to identify the level of support for the model which it now wishes to pursue. If Thurles is to benefit from its rich sporting heritage and current facilities then a collaborative effort from the sporting organisations and service providers will be required.
The Committee is hopeful of a positive outcome from all these steps. If, however, it is clear that sufficient support for such an approach does not exist within the town, then the SportsFest concept is unlikely to prove viable and the activities involved may revert to the very successful Thurles Sarsfields Festival of Gaelic Sport.
If you are involved in a sporting organisation, sporting facility or visitor service in Thurles, please consider the contribution which your organisation, facility or service might be able to make to the achievement of such a vision and the support which you might require to realise that potential.