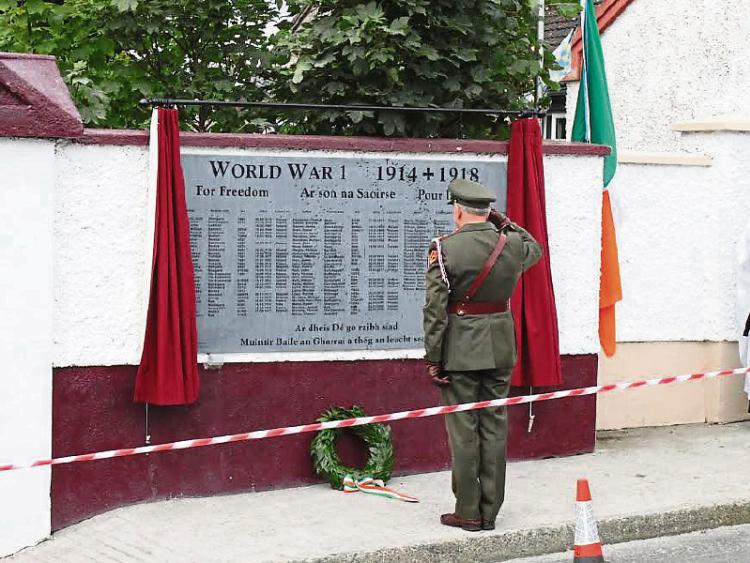 Ballingarry honoured eighty parishioners who served in World War 1 in a moving ceremony in the village on Sunday.

A plaque was unveiled with the names of all eighty who served in various capacities.

They were seventy eight soliders, one chaplain and one nun.

The highest number of casualties from the Ballingarary area was in August 1917, exactly one hundred years ago.

At one stage during a special mass to mark the event, curate Fr Derry Quirke blew a whistle which would have signalled the time during the war for the soldiers in the trenches to ‘go over the top’ and face almost certain death.

The plaque was unveiled by brothers and sister Paddy and Anthony Butler and Ann Walsh who are sons and daughter of William Butler, Boulea who survived the War and died of his wounds in 1957.

Proceedings commenced with a moving ceremony in The Church of the Assumption, celebrated by Fr. Derry Quirke, with Rev. Victor Fitzpatrick from the Kilcooley and Fertagh Parish in attendance and they were led into the church to ‘Amazing Grace’ played by Ger Neville from the Moycarkey Pipe Band.

The ceremony began with the presentation of individual White Crosses by a family member to the altar with the names of the 78 Soldiers, 1 Chaplain and 1 Nun, with young people from the parish reading out each name.

Fr. Quirke gave an amazing account of experiences these soldiers would have encountered on the Front and the most moving moment was when he ‘blew a whistle’ to replicate the indication for the soldiers to ‘Go over the Top’ out of the trenches, to almost certain death. The choir’s participation in the church enhanced of the ceremony, a fitting tribute to Sr. Teresa Walsh who fulfilled her final duty as choir organist as she moves to Clonmel this week and a lovely presentation of flowers was made to Sr. Teresa by Fr. Quirke and Kitty Norton on behalf of the parish in appreciation of her work in the community.

The reflection ‘Road to Eternity’ following communion was read by Carmel O’ Brien. The congregation was lead from the church to the unveiling to ‘Going home’ played again by piper Ger Neville.

Chairman Martin Maher introduced Dr. Thomas McGrath, local historian who gave a fascinating account of the involvement of the individuals commemorated on the plaque, highlighting the numbers killed between 1914-1918, with August 1917 having the highest number of casualties from the Ballingarry area.

He also linked significant historical events such as the Battle of the Somme with Patrick Delaney killed on 1st July 1916, the first day of the battle.

Representing the Defence Forces, Major General Kieran Brennan laid a laurel wreath and addressed the gathering thanking the committee for the invitation to himself, his wife Marie and his comrades in attendance on the day.

He gave a very fine account of what war means and spoke about the continued peace keeping mission of the Irish Defence Forces in places like The Lebanon, Goa and Mali as well as assisting local communities in times of need such as the flooding in Donegal last week. He commended the committee for the excellent plaque unveiled and suggested that a plaque such as this should be in every parish in Ireland.

Anthony Ivors, The Commons, who had raised the tri-colour at the 1848 Monument for many years, was then invited to raise the tri-colour and the bugler played the poignant ‘Last Post’ before Amhrán na bhFiann was played by the piper.

MaryAnne Maher read ‘In Flanders Fields’, after which a lament was played by the piper. Chairman Martin Maher noted that another important event is due to take place in the parish on 30th September next with the National Famine Commemoration being held in The 1848 Warhouse.