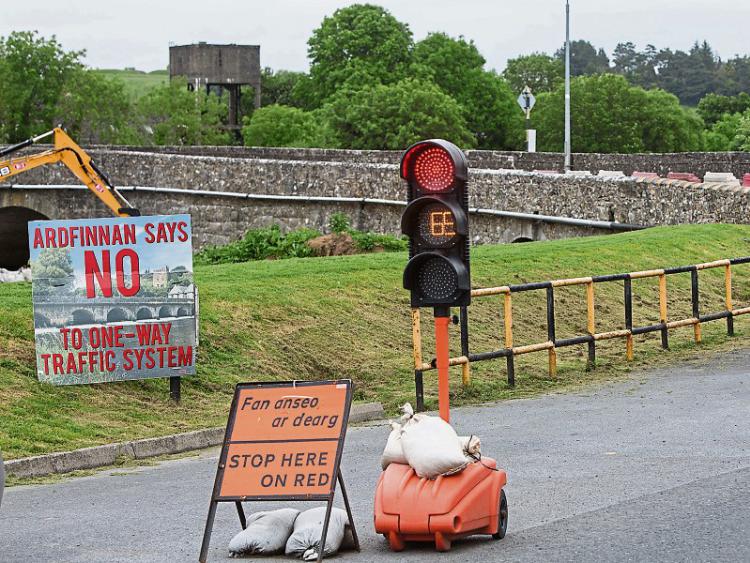 Those behind the campaign to have the one way system and traffic light system reversed vowed to continue in their battle to restore two way traffic to the bridge and do away with the traffic lights.

Afte rmonths of wrangling between the county council and those opposed to the one way system and lights, public representatives were informed on Monday of the council decision.

It came after public representatives had met with Transport Minister Shane Ross in Dublin and after rows between Minister Ross and Tipperary County Council in recent months over the failure by the council to spend the €800,000 allocated to repair the bridge.

Tipperary County Council turned down requests for members of Ardfinnan Community Council and members of the Press to attend Monday’s meeting.

Deputy Mattie McGrath said the campaign to remove the lights would continue despite the decision.

“This could go all the way to the High Court. People feel very strong about it and are not going to give up on it now.” he said.

“Everything now has to be decided at a workshop. The press are locked out, it is undemocratic. It’s the council way or the highway” said Deputy McGrath.

He said the community had not been properly consulted on the matter.

“Ardfinnan is a long way from Nenagh where the council bosses operate from. The community will not lie down on this” he said.

Deputy McGrath said he was very concerned about the dangers to children attending Ardfinnan primary school which was re-opening after th e summer on Thursday.