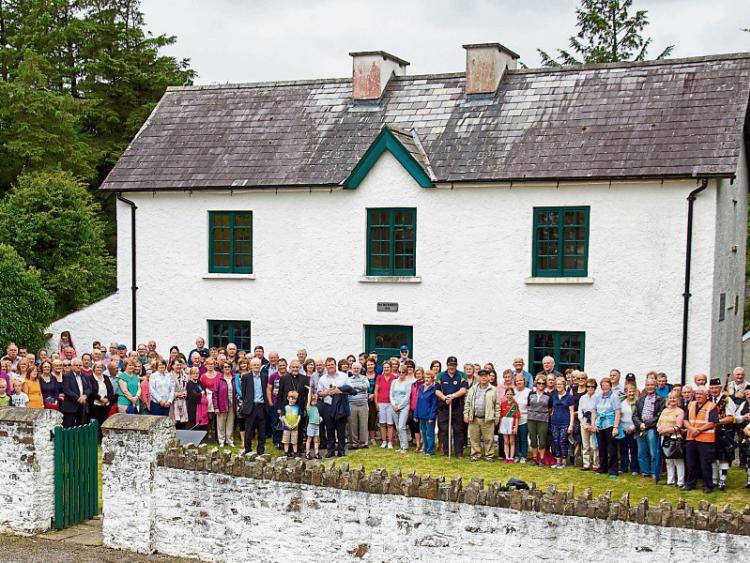 The eleventh annual Ballingarry Famine 1848 Walk took place last Saturday, 29th July, in a mixture of sunshine and occasional light rain but the weather couldn’t dampen the enthusiasm of those present.

This event is a joy every year for those who take part in the short walk from the starting point at the Young Ireland and National Flag monument in the village of The Commons to the Famine Warhouse which is 1 1/2 miles away. The walkers were lead by the Moycarkey Pipe Band.

On arrival to the Famine Warhouse and after the keynote speech from the Archbishop light refreshments were served from the tea room in the courtyard. Local band “The Mangled Badgers” provided a wonderful selection of music which added to the occasion.

The Archbishop of Cashel and Emly lead this year’s walk and in a major speech after the walk he spoke on the theme of famine from his own experience of working as a missionary in Africa.

In his opening address Archbishop O’Reilly told the crowd that Cardinal Tomás Ó’Fiaich who unveiled the monument in The Commons was his Professor of History in Maynooth and how it was a great honour for him to be asked to lead the walk.

The Archbishop then went on to speak of the current plight of people suffering throughout the world:

“We walk with one thing in mind to arrive at our destination it is not far and quite safe – a pleasant day with pleasant company. But with the memory of those who travelled similar roads around Ireland during the famine years and whose graves are along the “long acre”. However, ours is not just a memory of the past. Ours is a journey of solidarity with those who at this moment are on the road – travelling seeking food and shelter, safety and security for family and friends, fleeing from war and strife. Our journey is not meant to be undertaken in sadness but rather in  awareness of a world beyond our own. A world where many – especially the young and the elderly suffer greatly – this thought  is sobering and thought provoking as we travel the short distance to the Warhouse.”

“At a time when a record number of people around the world are displaced by violence, the international community needs to stand behind international law to ensure safety for people who have been forced to flee as a result of famine or civil unrest.”

“Pope Francis has taken a special interest in the area of Migrants and Refugees. He has established a new Congregation in Rome to oversee the situation: “The Dicastry for Promoting Integral Human Development”: he himself is head of that Department.”

“Today, there are more migrants more refugees and more human migration than at any time in history. (78 million refugees and 245 million migrants around the world with the likely hood that this number will continue to grow)”

“Solidarity among peoples is key to our ability to build a world of justice and peace. I would like to finish with the words of Saint Pope John Paul II: Solidarity is not a feeling of vague compassion or shallow distress at the misfortunes of so many people, both near and far. On the contrary, it is a firm and persevering determination to commit oneself to the common good; that is to say to the good of all and of each individual, because we are all really responsible for all.”

The committee of the Ballingarry 1848 Historical Society would like to extend their gratitude to the Archbishop for leading the walk and delivering such a poignant speech.

They would also like to thank those who attended the walk and helped the committee in any way:- those who provided and helped with the refreshments, the musicians, The Mangled Badgers,, the Civil Defence, the Moycarkey Pipe Band and also to Dermot Ronan for the use of his sound equipment on the day.

On the following day, Sunday 30th July, there was music and readings of prose and poetry on the Famine and Young Ireland in the tea room in the afternoon.

Our next major date at the Famine Warhouse is September 30th 2017 for the State National Famine commemoration which will also involve community events and we will have more details on this event in the coming weeks.