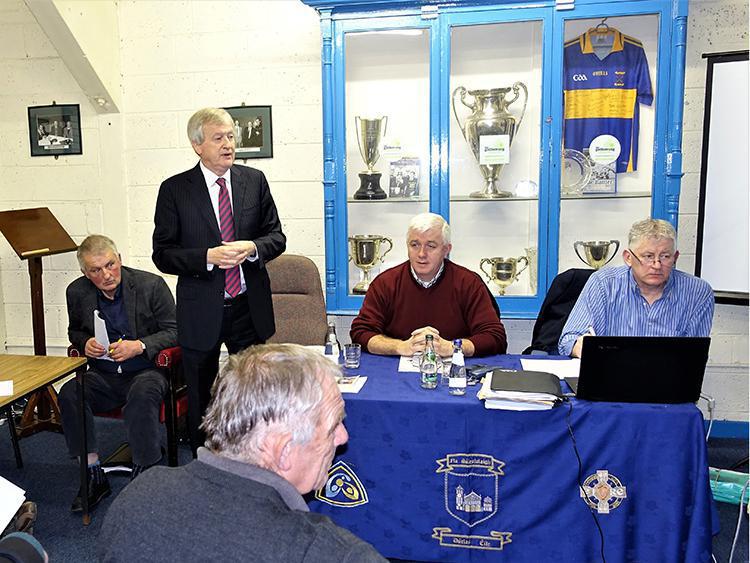 On Tuesday night, February 21st delegates to the County Committee Meeting of Coiste Chontae Thiobráid Árann backed Páraic Duffy’s proposal to revamp the senior inter-county football championship.
Despite the fact that the Tipperary senior football manager Liam Kearns, the Tipperary senior panel of players and the Football Board (led by chairman Joe Hannigan) were opposed to the motion before Congress delegates to the County Board voted in favour (36-20) of Páraic Duffy’s proposal.

Under the terms of the Páraic Duffy proposal the last eight teams in the All-Ireland football championship (four provincial champions and four qualifier winners) would be split into two groups of four and play off against each other. The system would involve an additional eight games, but the proposal also insists on a tighter schedule of games and a revised policy concerning replays which would ensure the All-Ireland finals are played before September and thereby free up significant time for the scheduling of club championships.

On Tuesday night Football Board chairman Joe Hannigan spoke out against the proposed changes and indicated that football committee opposed the motion.

“This motion has been sold on the basis of giving more time to clubs and more money to County Boards, but we feel that we could not work with it,” Mr Hannigan said before illustrating his argument with the example of a county which lost a provincial semi-final under the proposed system being required to play three qualifier games to reach the quarter-final stage only to then be required to play three more games.

According to Joe Hannigan “eight games in eleven weeks isn’t a possibility”.

“We don’t think this is the answer to the problem,” Joe Hannigan added.

“It is very much weighted in favour of teams who win a provincial championship,” the Shannon Rovers man added.

In response former County Board chairman John Costigan (JK Bracken’s) said that there was “an awful lot of positivity to the motion”.

“I would be reluctant to dismiss it,” John Costigan said.

Toomevara delegate Jackie Meagher described the motion as a “starting point” and spoke in favour of supporting a motion that, Mr Meagher felt, was designed to free up time for club fixtures.

“It is hard to listen to Joe (Hannigan) talking about players being forced to play eight games in eleven weeks when club players are being asked to do that all the time,” Jackie Meagher said.

In response Clonmel Commercials delegate Derek Williams argued that the County Board should support the decision of the Football Board.

“We should support the decision of the football committee. I don’t think there even should be a vote taken,” Mr Williams said.

In response County Board secretary Tim Floyd explained that it was important for all of the club delegates to vote on the motion since the proposal effected everyone (the Football Board is essentially a sub-committee of the County Board).

“It is up to every club to make up their own mind,” Tim Floyd explained.

Central Council delegate Seán Nugent spoke in favour of the motion although he did qualify his remarks.

“It is not perfect,” Seán Nugent said, “but we need to make a start on the serious problem that we have with club fixtures.”

Mr Nugent explained that he was personally against the idea of bringing the dates for the All-Ireland finals forward, but “we have to suffer a bit of pain if we are to sort out the club fixtures”.

“This is the first serious effort made to create a defined season for the club players and I would appeal to delegates to think very carefully about this motion,” Seán Nugent added.

Mr Nugent said that he would be concerned that if the motion was rejected by Tipperary delegates it would send out a “terrible message” that the County Board was “not progressive in terms of attempting to address the problem with club fixtures”.

County Board treasurer Michael Power (Newcastle) spoke out strongly against the motion. Mr Power highlighted the fact that the proposed change would require players to “concentrate on one game” and that it would have a severe impact on dual counties.

“We are increasing our inter-county programme (of games) and no one can tell me otherwise,” Mr Power said.

“If this motion passes, as sure as day follows night, hurling is going to have a similar format,” Michael Power added before indicating how concerned he was that the physically demanding nature of the new series of games would make huge demands on players.

“How long more we can keep our top players playing club and county? I don’t know,” Michael Power said.

County Board vice-chairman John Devane admitted that there was “good and bad” to the motion, but the Boherlahan-Dualla man argued that a “good part” of the motion was that it would work to condense the provincial championships.

Mr Devane also warned delegates that “if it is successful you can be guaranteed that it will come in for hurling as well”.

County Board secretary Tim Floyd said that he believed that under the proposed changes that “club competitions will prosper” and that although there were negatives which could be associated with the motion the “exposure of the club competitions” would “make up for it”.

It was clear at Tuesday night’s meeting that delegates had warmed to the idea of supporting the Páraic Duffy proposal based on the fact that it would work to condense the provincial championships and bring the All-Ireland finals forward – essentially delegates appeared to back the motion because it would work to create a defined season for club players.
LIAM KEARNS

Speaking to the Tipperary Star on Tuesday afternoon Tipperary senior football manager Liam Kearns declared that his management team, the Tipperary panel of players and the Tipperary Football Board were opposed to the potential introduction of Páraic Duffy’s proposal to revamp the All-Ireland championship.

“Speaking on behalf of the Tipperary senior football management team, the Football Board and our players I would like to say that we are against the round robin proposals. We don’t believe that it is going to benefit us or the likes of counties like us. It would put massive pressure on our resources. That’s the reality of it and it would give the weaker counties no chance,” Liam Kearns told the Tipperary Star.

“I believe that it is going to favour the strong counties and I believe that only the panels with the greatest depth will be able to cope with the amount of games that are involved. It is totally and completely, in my opinion, biased towards the top teams in the country,” Liam Kearns explained before revealing that he had made his feelings on the matter known to County Board secretary Tim Floyd.

“It’s very simple. If you lose a championship match and go into the qualifiers you are going to have to play four or five games in about six or seven weeks and then when you get to the quarter-finals you will then have to play three of the strongest teams for three weeks in-a-row.

“It makes it an absolute impossibility (for a team like Tipperary to achieve what the Premier County did in 2016 when reaching an All-Ireland semi-final). It favours the teams with the most depth – Dublin, Kerry, Mayo, Tyrone and all the teams that are up there at that level. It does not favour or it does not give any chance to the teams below that,” Liam Kearns said.

“You saw what we did last year: we got to an All-Ireland semi-final playing the same fifteen players over the course of the competition. That is unheard of and it would be very difficult to repeat again. Any injuries to any of our key players would have put our challenge off the rails. The bottom line to me is that it’s about money and it’s about elitism. It’s about getting the eight strongest panels playing each other in Croke Park. It really does make it an impossible task for the teams below the top seven or eight teams in the country.”

Essentially, Liam Kearns has argued that had Páraic Duffy’s proposals been inaugurated prior to the 2016 All-lreland Senior Football Championship Tipperary’s thrilling charge to last August’s semi-final against Mayo would not have happened.

“I don’t believe that it would,” Liam Kearns said.

At that meeting Mr Duffy explained that since there was “no appetite” at national congress for a motion to do away with the provincial championships and because the options for a radical overhaul of the All-Ireland series were limited the Árd Stuirthóir was proposing a “modest” medium term adjustment which he hoped will have a “positive impact on club championships across the country”.

Tipperary Football Board chairman Joe Hannigan spoke out against Páraic Duffy’s proposals to alter the structure of the championship at the November meeting when suggesting that the format would “suit the strong counties”.

In response Páraic Duffy argued that teams like Tipperary would, in actual fact, benefit from playing quality opposition. Since the qualifiers were launched in 2001 twenty-three difference counties have made it to the last eight; an achievement which Páraic Duffy said “every county can reasonably aspire to”.

“You should have no worries about playing three of the best teams in the country – you have no reason to. There seems to be a fear here in Tipperary that you will not be able to compete, but you should have more confidence in yourselves. You can compete with the very best and you have already proven that,” Páraic Duffy said.

Mr Devane also pointed out that the Tipperary club champions had been drawn in the quarter-finals of all six Munster club championships and that the executive would be under “huge pressure” to get the respective competitions concluded in time.

“To me it seems very unfair, but that’s the way it is,” John Devane said.

Speaking on behalf of the Tipperary Supporters Club at the February meeting of the County Board Seán Nugent revealed that a number of work groups had been formed to attract more funding into the organisation while 1,580 members had joined the club. Mr Nugent indicated that the target membership for the year was 3,000.

“It costs €40 to join – that’s double of what it costs to join the Friends of Tipperary Football, but there is a video with it so it is good value,” Mr Nugent joked.

At the February meeting of the County Board chairman Michael Bourke paid tribute to the work that Ed Donnelly has done for Tipperary while he also congratulated Our Lady’s Templemore on their magnificent victory over St Colman’s Fermoy in the recent Dr Harty Cup final.

“I would like to thank Ed Donnelly for his contribution over a long number of years. I would also like to congratulate Our Lady’s Templemore on winning the Harty Cup,” Michael Bourke said. Mr Bourke’s sentiments were greeted with a warm round of applause from the delegates present.