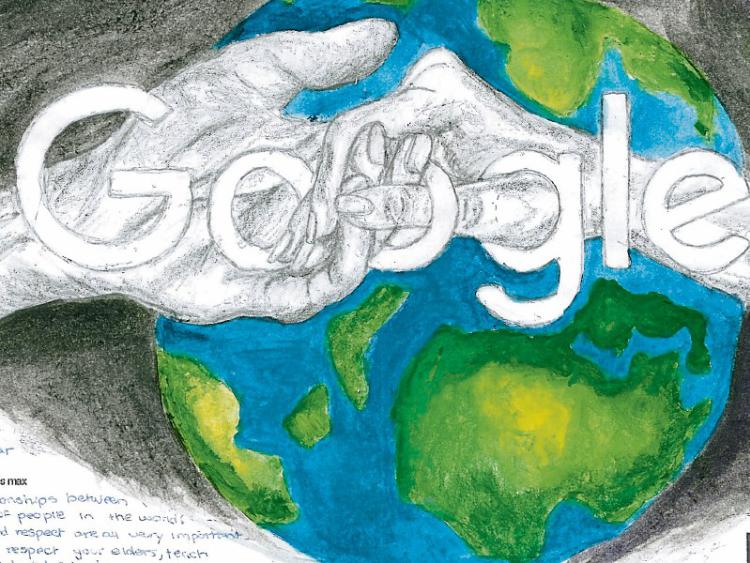 VOTE FOR LENA AND EMMA’S DOODLES USING THE LINK BELOW
Two budding artists from Loreto Secondary School in Clonmel are among the 75 finalists shortlisted from over 4,200 students for this year’s Doodle 4 Google art competition.

Second year student Lena Slattery and fifth year’s Emma Sutcliffe’s doodles are based on this year’s theme ‘If I could create anything it would be’.

Both Lena and Emma’s Doodle 4 Google entries are involved in the online public voting stage. You can view and vote for their doodles online until February 21 on https://doodles.google.ie/d4g/.

There are five age categories with 15 doodles shortlisted for each. Lena’s doodle is in group 4 and Emma’s is in group 5. Each of the group winners will receive a Chromebook. The overall winner will receive a €5,000 college scholarship and a €10,000 technology grant for their school.

“Please help both students by voting for their doodle. The more votes they get the better chance they have of winning,” Loreto art teacher Anne-Marie Kirby encourages.

Emma’s doodle is called ‘A world without war’.
Emma Sutcliffe.

“My doodle shows the relationships between different races and ages of people in the world. For me, friendship, peace and respect are all very important aspects of life. You learn to respect others, teach children peace and to build friends through life,” Emma highlights.

Borrisokane Community College’s Niamh Ryan is also in group 4. The title of her doodle is ‘Balance is not something you find. It’s something you create’.
Second year student Niamh Ryan.

The five most popular doodles, one from each age category, will go forward to the grand final on April 3rd where the overall winner will be announced.

Fionnuala Meehan, VP and head of Google in Ireland, says the level of entries this year has given the judging panel a tough job to do. “I really enjoyed seeing what the entrants did with this year’s theme as it gave them the opportunity to create anything they wanted and looking at the entries they show a lot of fantastic innovative ideas. Now it’s up to the public to get involved and help choose this year’s winner by visiting the Doodle 4 Google website and voting for their favourite doodle,” she adds.